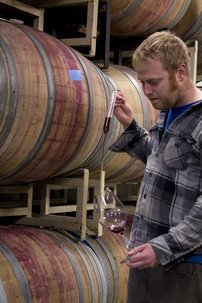 Lee Hartman accidentally fell into the world of wine at the age of 23 but has since intentionally made it his life's work.  Beginning with planting Bluestone's 11 acres in 2008, he worked with his parents to build the winery in 2010, and opened the tasting room in 2011.  Their first year open he won one of seven gold medals in the Governor's Cup White Competition with his Blue Ice Dessert Wine (made from frozen Traminette) and followed it up the next year with another gold for his 2010 Cabernet Sauvignon.  That Cab was in the inaugural Governor's Case and was also named one of "37 Great American Wines" by Saveur magazine.

Lee has continued to produce excellent wines through both good and difficult vintages, from Chardonnay to Merlot to Golden Muscat, totaling over 15 wines in the tasting list at any given time. On top of growing and caring for wines, Lee has also become an advocate for Virginia wine.  Whether getting to know legislatures on a first name basis at the annual Wine and Vine Day in Richmond or reminding restaurateurs in Harrisonburg that local wine is local food, he is always looking for a way to promote Virginia wine.  As one of only two winemakers in Rockingham County (the most agricultural county in the commonwealth), one of Lee's main directives is to show the public how similar he and his team are to the other surrounding farms.  Welcoming everyone to the family's home, Lee's goal is to show that  Virginia Wine can be world class but still inviting to everyone.